I love this time of year. When the air gets really crisp but we still have a lot of days of sunshine, and I just want to make a big pot of soup and a loaf of crusty bread for dinner every night. The funny thing is, I used to hate soup. I remember complaining as a teenager that soup wasn’t a real meal, because … well, I don’t remember why I said that, actually. And then one day my sister made this amaaaaaaazing creamy chicken noodle soup, and I was sold. First of all, cream. Am I right? And second, she made her own broth. For meals as simple and basic and everybody-has-a-good-recipe as chicken noodle soup, you need to start with quality ingredients. And we all know from the title of my blog that I’m just a little bit passionate about making food from scratch. There are a few reasons for that:

Next time you’re thinking of buying a can or carton, read the ingredient list. I’m quite happy with my 4-5 ingredient list of real food + water, thank you very much. 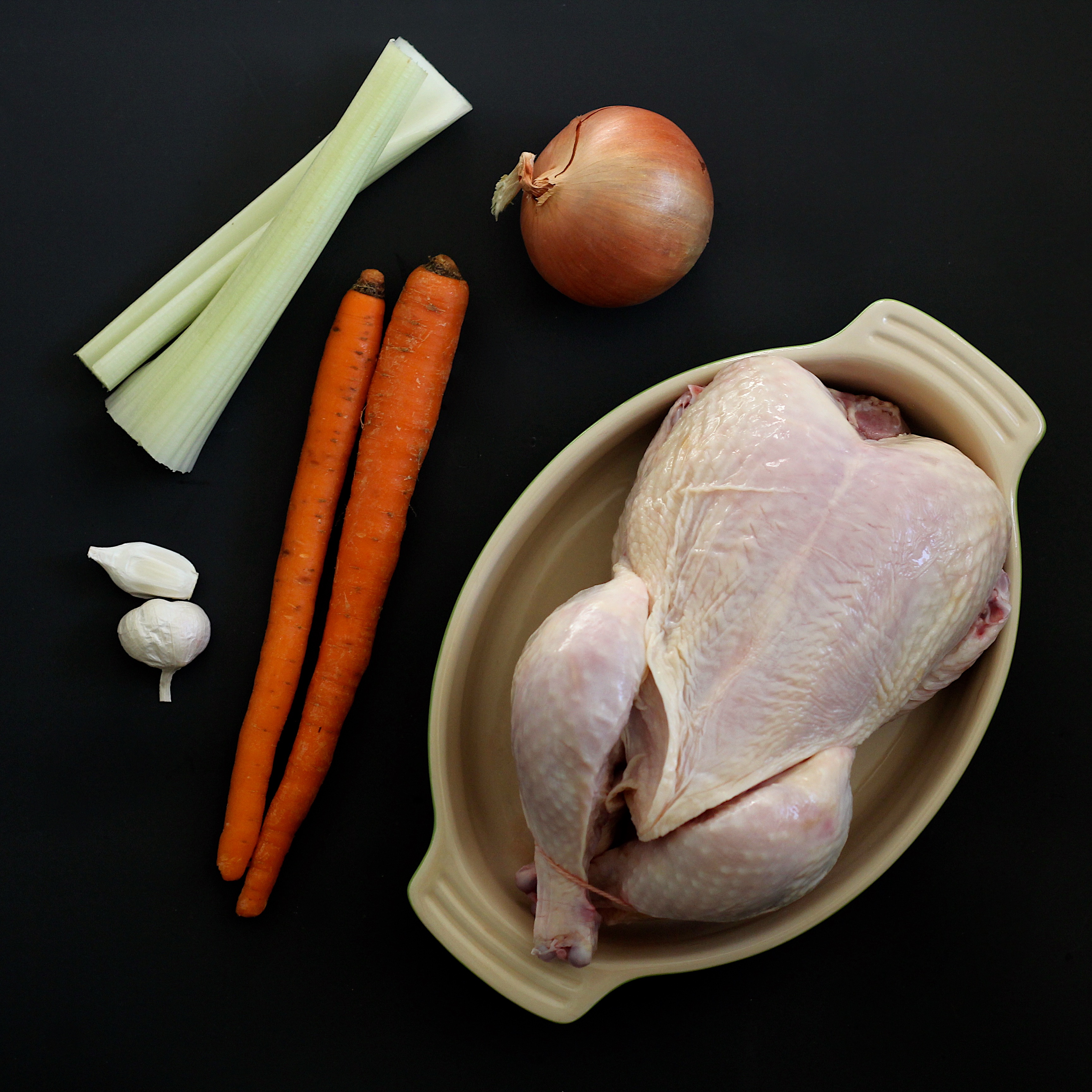 And you’re probably wondering what the difference between broth and stock might be. The two words are often used interchangeably. Basically, broth is lighter, relies on the meat more than bones, almost always has vegetables added, and is often cooked for a shorter amount of time. I like to use it for lighter, brothier soups, and for cooking grains like rice and quinoa, when you don’t want it to take over more delicate flavors. Stock, on the other hand, is made with little or no meat, but with the bones instead, and vegetables are optional (and if used, they are added only in the last hour or so of cooking to prevent bitterness). The bones are often roasted first, and are cooked in the water for hours to pull out as much of the amazing nutrients and flavor from them as possible. A little splash of vinegar (I always use organic raw apple cider vinegar) encourages the bones to release the minerals and collagen and good stuff that makes stock so good for you, and after such a long cooking time, the flavor of the vinegar isn’t noticeable at all, so I recommend it. Stock is great used in heartier soups and stews, where it’s more robust flavor will contribute to the resulting dish. But really, they both work great in almost any application.

In both cases, though, You add everything to the pot, bring to a boil, then drop to a simmer. Don’t be tempted to boil for the whole length of time to speed up the process. You’ll end up with tough meat instead of it being fall-off-the-bone tender, and your liquid will be cloudy and even a little viscous sometimes. And the flavor is compromised. The goal is a clear liquid and pure flavor, which is only achieved through gentle simmering. 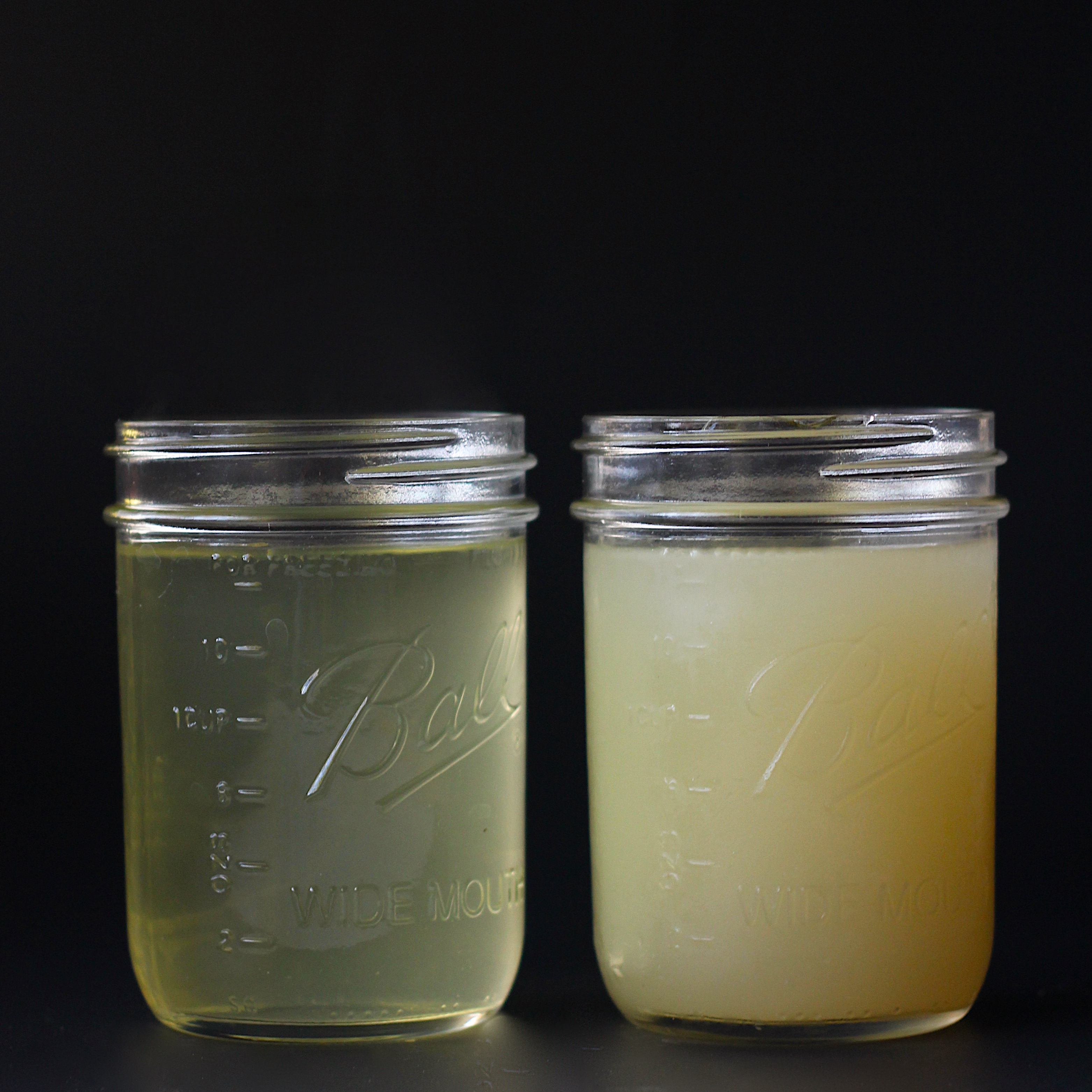 See the difference? On the right is a boiled broth and the left is simmered. And the simmered broth is not lacking in flavor by any means. If anything, it had a more pronounced, clean, “chicken-ey” flavor. Oh, and I know I’m going to sound like a broken record here, but I only use free range, organic chicken when making broth or stock. I have a lot of reasons for this, but the biggest honestly is flavor and smell. Years ago before I switched to free range organic chicken, I used to hate the smell in my house on days I’d make stock or broth, it was kind of gamey and smelled off. Now, it’s sweeter and smells like … well, a chicken. I figure the bad smells in the conventionally raised chickens has to do with the additives once processed and the feed and antibiotics and hormones and the fact that those chickens never walked, let alone saw the light of day. I realize the cost difference is significant, but you get an entire poached chicken, and (if you plan right) 2 whole gallons of broth and stock for the price of one chicken, so I think it’s worth it.

And, as with a lot of my favorite from-scratch basics, it freezes really well. I freeze in 2-4 cup portions and stock up my freezer for a week’s worth or more of soup. If you can find really great zip-top freezer bags that you trust won’t leak, fill the bags, try to get as much air out as possible, then stack flat in your freezer. Once frozen solid, you can line them up vertically like a bookshelf. If you’re concerned at all about leakage, go with good old fashioned plastic or glass containers. Just make sure the glass containers you use are labeled “freezer-safe”. I’ve made the mistake of ignoring that label, and had shattered glass all over my freezer with a solid jar-shaped broth ice cube sitting in the middle of the wreckage.